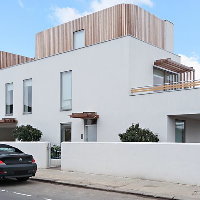 Having merely days to secure the purchase of a plot of land on Waldo Road, NW10 from Network rail put architect/developer Alfred Munkenbeck in a bit of a conundrum. He initially appraised the plot as industrial waste land, but after careful reconsideration, he realised the rarity of obtaining virgin building land in a London location. It was an opportunity Munkenbeck could not turn down.

The collection of three houses now sitting on this West London plot have been designed and developed by Munkenbeck and his partner, and are at the forefront of modern property development – so much so that both architect partners have taken two of the houses for themselves, leaving just one for sale. Thank you! You have successfully subscribed to our newsletter.